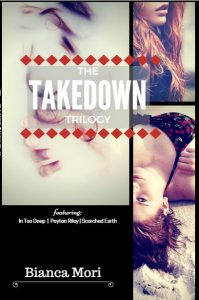 About the Takedown Trilogy

Follow the trail of one extraordinary woman with a special set of skills and a past both mysterious and painful in the Takedown Trilogy, a romantic suspense tale of thrilling twists and a whole lot of steam.

Watch the action as it jets from a lush tropical island in the midst of a tempest, springtime in Amsterdam, a sticky Barcelona sojourn to a final assault in a posh London neighborhood. Meet the cast of characters: a Frenchman bent on payback. The aristocrat with a score to settle. A distant father and demanding boss. The cop who needs her. And the equally mysterious, equally skilled man drawn to her against both their better judgments.

First time in paperback
For the first time in print, all three books of the romantic suspense Takedown series will be published in one paperback! The books are:

To order your own copy, email thebiancamori@gmail.com. Price is Php350. 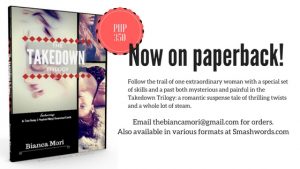 Read them anywhere
The Takedown books have been previously exclusively available on Amazon only. Starting August 21, they will be released in various ebook formats and platforms, including Apple, Barnes & Noble and Kobo. Go to Smashwords.com for In Too Deep, Peyton Riley and Scorched Earth in your preferred ebook format!

Praise for the Takedown Trilogy

“If In Too Deep was summer fling, sexy trysts and gorgeous island, Peyton Riley is full on bad-assery.” – Jay E. Tria, author of Songs of our Break Up and Blossom Among Flowers

“Action, intrigue, gorgeous European settings and a redhead? Count. Me. In.” – Carla de Guzman, author of Cities and Marry Me, Charlotte B!

“The third and longest book in Bianca Mori’s Takedown series, Scorched Earth also happens to be the best…A must-read for fans of romantic suspense.” – Liana Smith Bautista, blogger, Will Read For Feels

Read about Bianca’s thoughts on the Trilogy and being a romance author...

Is this a project you’ve always wanted to write?

Book 2, Peyton Riley, opens with an interrogation scene that had been in the back of my head for some time. There’s even a bit of dialogue between the leads that I remember scribbling wayyy back – the part about “thrown in health and dental and this could be a 9-5 job.” So I’ve always had the idea of writing a badass, smartass female character. I just needed a plot for her to live in!

What was your inspiration in coming up with the concept for your story?

It really just sort of happened when I was coming up with a contribution to the Love’s A Beach bundle (which eventually became In Too Deep). I was thinking that a straight romance plot set in a beach seemed a little expected, and I wanted to spice things up with my story. So I thought, what if both MC and LI weren’t what they seemed? Why would they need to have different identities? Were they hiding? Why? And it snowballed from there. Before long I had the whole plot sketched out for a planned Trilogy. At that time I happened to catch The Losers on the bus during my work commute and I just got a kick out of the action in that movie (and Chris Evans hehe) so I think that influenced my plot outline a lot. (Of course the funny thing was that I got some bad reviews on that bundle because In Too Deep ends in a cliffhanger and it wasn’t what people were expecting! So lesson learned in marketing: never do a plot switcheroo. People want to read what they signed up for!) 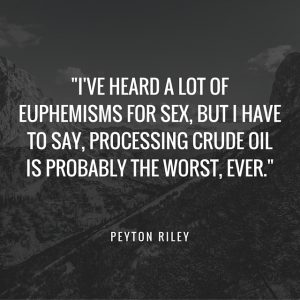 Do you identify with the lead? Why or why not?

Hehe. I kind of do. I’m an INTJ and I tend to detach when processing or evaluating information or making decisions — I’ve been called pragmatic at best (unfeeling at worst). The lead in The Takedown Trilogy has that detachment going for her too; in fact it’s a major source of conflict between her and Carson the LI in book 2, Peyton Riley. But if you read closely you’ll see she has a lot of anxiety, a lot of internalized turmoil just under the surface. I relate to that too — I place a lot of value on self control that people don’t know I’m going nuts under the surface already! 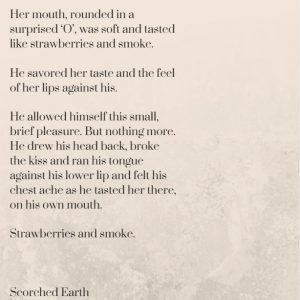 What are the common difficulties (in the process of writing) you encounter as an author of romance?

For me I always worry if I’m doing the romance justice. I can write “sawi” / unrequited love / loss well, but when it comes to kilig, to developing the attraction between my leads, so that its organic and unforced? I feel like I’m constantly balancing between too much (corny / cheesy) or too little (no chemistry). I also struggle with HEAs because of this!

What is the best part of being a romance author?

It’s a powerful thing, being able to evoke powerful feelings in people. I guess it’s easier to scare or disgust a person than to make them relive their happiest memories of love — or desire or attraction. Being able to do that, in however small way, is awesome. 😀

Bianca Mori is the author of One Night at the Palace Hotel and Tame The Kitten. She is interested in exploring power in romance and enjoys reading about demimondaines, pin-up girls and Jazz Age personalities and hopes to reinterpret these in her stories. She lives with her family and a hyperactive pug. Sign up for Bianca Mori’s newsletter, follow Bianca on Twitter (@thebiancamori), add her on Facebook and on GoodReads.

International participants picked for the raffle will win the Takedown Bundle in their preferred format.