* image from animal-kid.com via Google Images

I’m 42 years old. I’ve been in very few relationships in my life and only one serious one. I mean serious as in we lasted more than just a few weeks and we were accepted in each other’s families and there were times we actually talked about marriage and having a family and spending forever with each other. We were a couple for five years, more or less, counting periods within the five years we were apart, almost giving up but somehow wanting to try and rebuild. While we were successful getting back on our feet during those times of uncertainty, in the end, we’ve obviously had to part ways. Permanently. I have not been with anyone since.

I tried to get myself back on the market, so to speak, finding myself single and available once again. Enthusiastic friends tried to introduce me to potential suitors (and hopefully, the next boyfriend) but somehow, I just could not bring myself to open up and be more receptive and participative in the search for a new boyfriend. It may have been because of extreme fear of further rejection. You know, once bitten, twice shy. Or it could have been a case of the timing being just too soon.

Well, ‘too soon’ was obliviated by busyness at work. Days turned into weeks, and months turned into several years and before I knew it, I was nearing my 40s. And since I was still single and not even dating anyone seriously, I started to panic that life would pass me by. How do I hope to get that happy ever after I wanted for myself? The hubby who goes to work and supports our family, the kids who I will help get ready for school… The kind of ideal, dreamy family life scenario we have been taught in our youth to look forward to apart from a career.

The neurosis affected everything – my appreciation for life and happiness and contentment – although most likely, the tension from work greatly contributed to my unrest, too. And then I left my job, and went to live far away from everyone I know and everything that I was familiar with. Where I went, wherever it was, I found myself. I found out I can be alone and yet still be content.

It had been a decade since those moments of dread but hey, look! Life didn’t pass me by. Yes, I have remained single. No, I have not shunned marriage from my life. I have just learned to accept and be happy with what I have. Me. And I’m not such a bad choice for a life partner for me.

So what has this rambling to do with Valentine’s?

Before my serious relationship, I had always been single on Valentine’s day. When ex-BF and I were still together, we did not really celebrate Valentine’s day the way most couples do – go out on a date, with romantic candlelit dinners, a bouquet of flowers, chocolates, a stuffed toy or a piece of jewellery, then perhaps go dancing or see a movie, capping the date with a night (or just three hours) of romping in a dimly lit room. We simply stayed home, watched whatever’s on TV, gorged on takeout food or something he or I cooked. He said he didn’t believe in setting a special day just to celebrate love. Everyday should be a day to celebrate love. I sort of dug that, although I also believed he was a cheapskate and only avoided spending money. Har har! After five years, I was back to being alone on the day for lovers.

I may not have experienced trauma that’s as bad as what the next single person suffered from. I was extremely hurt when we broke up. I was even bitter for a while and every time Valentine’s or Christmas came, I curled my lip and muttered bah, humbug! But living alone all these years… I don’t know about you, but my ex was right. Valentine’s is an overrated red letter day on our calendar. Oh, I won’t berate couples who revel in it even if I do roll my eyes at how enterprises take advantage of the whole thing just to make extra money. Exorbitant prices for a bunch of flowers? No seats at my favorite resto when I’m very hungry? C’mon! 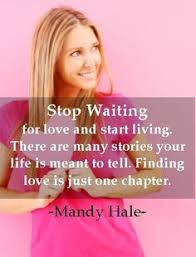 * image from www.pinterest.com via Google Images

But singles, really… There isn’t anything to be bitter about. There’s nothing wrong with being alone. Or celebrating Valentine’s with friends and family. We single women need to learn to enjoy ourselves. Although it would be nice to have that special someone, a significant other is not a prerequisite to being complete. Don’t wait until you’re 42 to realize this.